A Life Pattern In The Light Of Major Planets Transits

The following article was published in The Times of Astrology magazine May 2000 of New Delhi, India.

(The author had tried to evolve a method of taking transits by further simplifying the generalization of Transits of Major planets by rounding off the actual years of transits. Your editor reserves her opinion about such methods. However, looking to the labor put in by one of the brilliant scholars of Astrology in this exercise, the articulations of the author are published just to give an extra input to the thought provoking process of our esteemed readers.)

I propose to discuss the life pattern events of my horoscope purely from the angle of the transits of the major planets- Saturn, Jupiter, Rahu (Dragon Head) and Ketu (Dragon Tail). 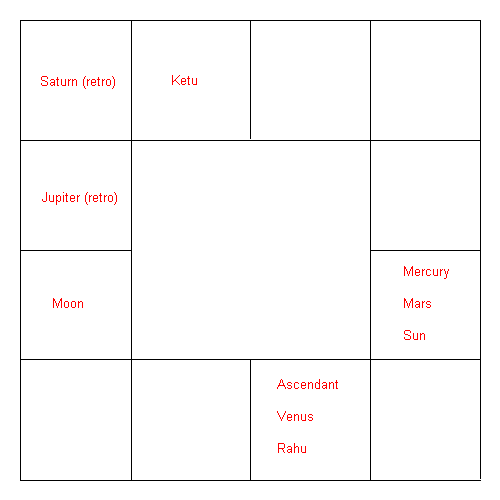 The natal chart and the other tables for the transits of Saturn, Jupiter and Rahu/Ketu mentioning the ages are given as a ready reckoner to visualize the events. The principle to be studied is that Saturn as karma karaka would just decide the events to happen and the natural benefic and Jeeva planet Jupiter and the natural malefics Rahu and Ketu would conduct the good and bad events age-wise depending on the connection of their transits over the concerned Bhavas, Bhava Lords, Bhava Karakas (significators).The recorded time at birth is 7 ghatis 55 vighatis after Sun rise. This is checked as per the Tatwa/Antartatwa Siddhantha (as given in Sri Divakaruni Venkata Subbarao’s book Jyotish Siddhantamu in Telugu language) for male birth on Wednesday, moveable Libra Lagna (Ascendant), Sravana (Moon Star) and found correct.
It is the prime responsibility of an astrologer to rectify the birth time and to consider the native’s background, before proceeding further by whatever method he is satisfied with and whatever Ayanamsha he is used to.
For the sake of ease, instead of checking the actual transits from ephemeris, I propose to take the transit duration in each rasi of Saturn as 2 ½ years,1 year and Rahu/Ketu as 1 ½ years. While doing so the planet longitudes in the natal chart may be kept in view to start the cycles of transits of the major planets. In this analysis, since the Saturn s almost at the end of Pisces (23.57) the cycle of Saturn is taken to start from Aries neglecting a duration of about 6 months for Saturn start. Since Jupiter is at the beginning of Aquarius (2.13) and Rahu is at the end of Libra (27.19) ,the cycles are taken to start from the same rasi with Rahu going anto-clockwise ,neglecting the minor durations of the start.
It is necessary to mention the longitudes of the planets in the natal chart sequentially to see which planet is crossed first by the transit planets to finalize the events and timings. For simplicity sake, the bhava chart and dasa periods are not taken, since different astrologers use different systems only. The Niryana position of planets and Hindu astrology principles are followed.
The idea is not to lessen the importance of the various traditional systems to get the life pattern, but just to check how far the major planets transit themselves may give some clues broadly. The events are evaluated age-wise and this very fact shows a span of about a year for an event to happen.
The so-called Nadi Astrologers also read from their palm leaves for events to happen in a span of 1 to 2 ½ years, from which it is inferred that they may be following the cycles of the transits of major planets with the help of the natal chart.

The transits of Saturn age-wise in the rasis is as follows:

The transits of Jupiter age-wise in the rasis is as follows:

The other agewise cycles of Jupiter transits are not given to save space and the readers can easily find them in similar sequence.

The transits ofRahu age-wise in the rasis is as follows:

The other age-wise cycles of Rahu are not given to save space and the readers can easily find them in similar sequence.
The Ketu transits will be in the opposite rasis to Rahu transits for the same ages.
Let us now see Major Events in the Chart

Education (4th for normal and 9th for higher education):

The degree in Mechanical engineering was in Sep 1959,failing first in March under unusual circumstances (are 21/22) . Around this age, in transit Saturn was in Sagittarius , Jupiter in Scorpio, Rahu in Leo and Ketu in Aquarius. Since Saturn and Jupiter are in Parivartana ( one in other’s sign) ,they can be considered to be in their own signs also. In the transit, Saturn in Sagittarius ( in Jupiter sign) aspects the 4th bhava lord natal Saturn by 3rd aspect being considered to be in Aquarius due to Parivartana,vebrates 4th bhava being just behind ( by Achadana), aspects natal Jupiter education Karaka (significator) in Aquarius by 3rd aspect without considering Parivartana and also gets connected with another education Karaka natal Mercury in Leo by both being in East directions (Aries, Leo, Sagittarius represent east) or being in trine. Jupiter in transit was in Scorpio ( Mars sign 2nd house if also considered for education) aspects 4th lord natal Saturn by 5th aspect. Transit Rahu in Leo over natal Mercury aspects natal Jupiter both Karakas and natalSaturn 4th lord being in Parivrartana. Transit Ketu in Aquarius was over natal karaka Jupiter and natal Saturn 4thlord due to Parivartana aspecting natal karaka Mercury. The other proposition that the retrograde planets can be considered to be in their previous signs, can also be applied for analysis for the natal retrograde Saturn and Jupiter, if necessary. In this chart since Saturn as karmakaraka connected to the 4th bhava decided the event of education around that age. The natural benefic Jupiter conducted the education of mechanical engineering being transiting in Scorpio in the sign of Mars representing machinery and technical side. The natural malefics Rahu and Ketu being connected to 4th bhava in ther transits played their mschievous role of giving a failure and break in education, though the native was a brilliant student.
The other higher educations are diploma in French March 1969/70 (age 31/32), Master degree in mechanical engineering march 1986/87 (age 47/48) and diploma in management Nov 1987/88 (age 50/51). In Nov 1987 /88 in transits Saturn in Sagittarius aspects 9th house, Jupiter in Aries aspects natal 9th lord Mercury in Leo by 5th aspect, Rahu and Ketu in Capricorn and Cancer are not connected to 9thbhava. In 1986 transit Saturn in Scorpio aspects 9th lord natal Mercury by 10th aspect, transit Jupiter in Aquarius aspecting 9th bhava and 9th lord natal Mercudry, Rahi and Ketu in transits in Pisces and Virgo are not connected to 9th bhava. Thus during transits in those ages , Saturn as karmakaraka decided the events of higher education /knowledge and the natural benefic Jupiter conducted the events without much obstructions from the natural malefics Rahu and Ketu.

The voluntary retirement was on 1st Sep 1990 (age 51/52). The transit Saturn was in Sagittarius aspecting 9th bhava (12th to profession 10th bhava), 5th bhava (12th to service 6th bhava) and 6th bhava lord natal Jupiter. The transit Jupiter in Taurus aspectiing natal 10th lord Moon by 9th aspect almost touching 9thbhava (12th to 10th ). The transit Rahu in Sagittarius aspects 9th bhava and the transit Ketu was over 9thbhava. Thus the transit Saturn as karma karaka wanted to decide to continue the service and also termination of profession/service. The transit Jupiter also wanted to conduct profession with a slight connection to negation. But the transit Rahu and Ketu strongly interfered for ending of profession /service. ( In fact Saturn and Jupiter continued the activities of Astrology/Philosophy subsequently after they entered Capricorn and Cancer). It may also be noted that the almost connection of transit Saturn to Capricorn and transit Jupiter connection to Gemini would be aspecting the Lagna lord natal Venus in Libra by their 10th and 5th aspects thus bringing out the self (voluntary) into the decision of retirement.

The son was born on 25 Nov 1964 (age 26/27). The transit Saturn is in Aquarius In 5th bhava over Jupiter karaka for children and over 5th lord natal Saturn considered to be in Aquarius being in Parivartana with natal Jupiter. The natal Jupiter is in Aries, but being retrograde aspects the behind 5th lord natal Saturn in Pisces.. the transit Rahu inTaurus is not connected to 5th bhava. The natal Ketu being in Scorpio aspects the 5th natal Saturn by 5th aspect. Thus the transit Saturn decided the event of birth of a child and Jupiter conducted the event. Rahu did not interfere though Ketu gave some minor tensions.

Subsequently, the native is continuing his hobby activities of research in astrology and philosophy, traveling abroad (9th and 12th bhavas) giving lectures /consultations, publishing books and articles on astrology(3rd bhava ) and counseling those who come for his advice. These events and subsequent future indications of life pattern can be similarly linked up with the transits of major planets over the concerned bhavas,lords and bhava karakas (significators).

I may mention here that I do notclaim to be introducing anything new here and this is only a sthula (broad) analysis to get some idea about the events. The retrograde motions of major transit planets in signs ,transits over Navamsha and other Varga chrts (divisional charts) and transits of other minor planets for monthly and daily level events, may give a better shookshma (subtle) life pattern events, particularly in the case of twins or those having similar charts. The Nadi astrology pattern of division upto 150 parts may give the subtlest life pattern story, if any astrologer really can do concerned research by maintaining and critically studying the life data of many charts in this field. Unfortunately most of the astrologers do not collect, maintain and follow the events critically with a research angle and discuss amongst themselves to formulate some important clues to hit the bull’s eye to evolve the subtlest life pattern of a chart to suit this modern circumstances. Of course, I do agree that it may be mostly possible to check the past events by whatever may be the method adopted and it is rather difficult to arrive at the correct future events by so many elimination processes without considering the background of the individual and checking the past events including the parentage (if not grand parentage also), co-borns, uncles, birth country, environmental circumstances etc to understand the pattern of the seed ,soil and season. I also agree that if this horoscope is given for analysis without giving any background, it may be difficult to predict these 4 past events in those ages definitely and then how one can hit future events accurately.

The readers of this esteemed “The Times of Astrology” may use this scheme at the outset intelligently to predict the events broadly before going into the detailed regular traditional methods of their choice.. I request the readers to inform about their findings of this method to me or write in this esteemed magazine for the benefit of all.